Attached also are the booking forms (BELOW) and programme list and posters for the Conference.

A conference to mark the centenary of the consecration of Saint Colman’s Cathedral, Cobh and the sesquicentenary of the laying of its foundation stone will take place on:

To Book Your Place 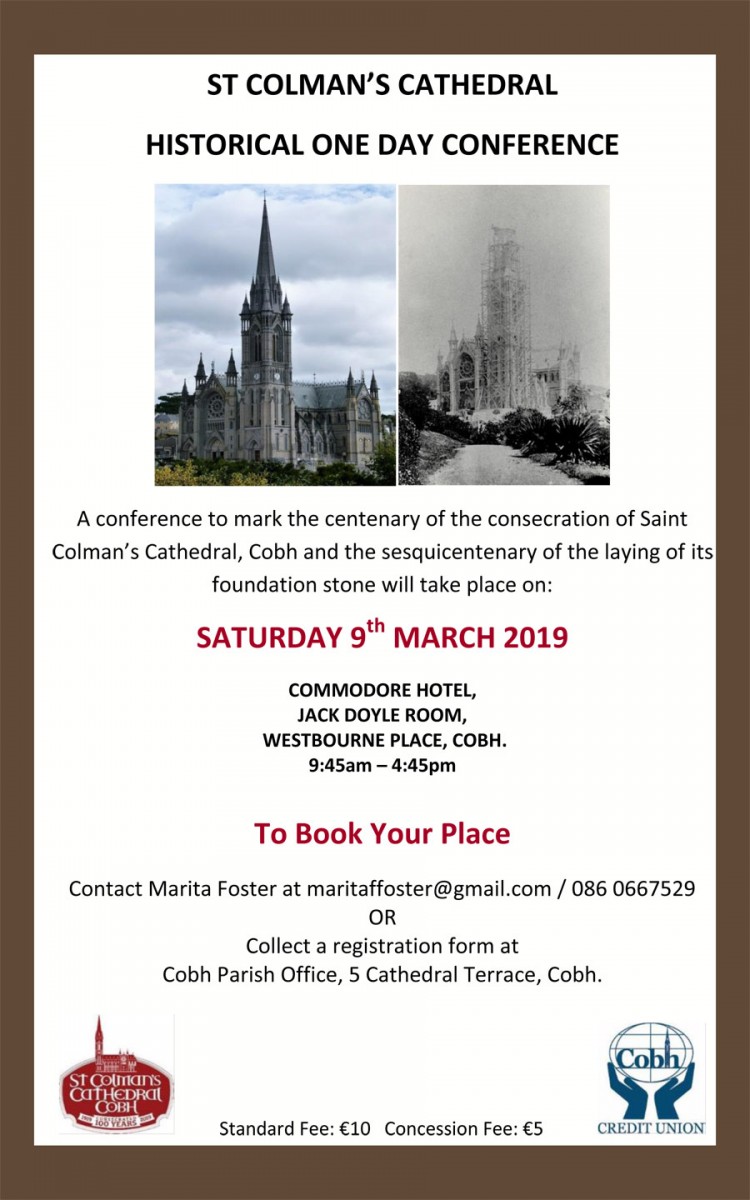 10.15 a.m. Gabriel Doherty, ‘From Insurrection to Independence: Irish life during the period of the construction of St Colman’s Cathedral and its consecration, 1868-1919’

1.30 p.m. Launch by Bishop William Crean of Walking to Heaven Backwards? Hope and the Catholics of the Cloyne Diocese, 1700-1830. Author: Martin Millerick

William Crean is the Catholic Bishop of the Diocese of Cloyne. He is chairman of Trócaire, a member of the Council for Catechetics and a member of the Episcopal Commission for Social Issues and International Affairs.

Gabriel Doherty is a College Lecturer in the School of History, UCC, with a research specialism in the ‘revolutionary decade’ in modern Irish history (1912-1923). He is a member of the Academic Advisory Group to the Irish Government on policy regarding the on-going ‘decade of centenaries’ and was the Historical Consultant to the Houses of the Oireachtas for its recent centenary programme.

Marita Foster is Deputy Director International at UCC. She is currently working on a PhD on aspects of the history of Cove/Queenstown/Cobh. She has lectured extensively on topics relating to the Famine, emigration and the local history of Cobh and the Great Island. Publications include articles on Cove during the Famine in the Atlas of the Great Irish Famine and on emigration from Queenstown/Cobh in the Atlas of Cork City.

Dr Andrew McCarthy teaches History at UCC. His research interests are modern Irish History. He has published and co-published in the fields of church, constitutional, financial and health history. He is completing (with others) a History of St. Colman’s College, Fermoy.

Adrian Gebruers is currently organist and carillonneur of St Colman’s Cathedral, positions previously held by his father Staf. A tutor in Carillon Performance at UCC and President Emeritus of the World Carillon Federation, he has been a guest recitalist on many of the world’s major carillons. In 2005 he received from Pope John Paul II the very special honour of being made a Papal Knight of the Order of St Gregory the Great (KSG) in recognition of his services to church music. He has been the recipient of several Travel Awards from the Arts Council, a research grant from the Department of Foreign Affairs, a Tyrone Guthrie-Cork County Council Bursary, a Cobh Community Award and commissions from the Contemporary Music Centre and Alfred University New York. A contributor to The Encyclopaedia of Music in Ireland, he and his father are also the subject of individual entries in the same publication.
Dr Ann Wilson lectures in Visual Culture in the Media Communications Department, CIT. She has published articles on the imagery and decoration of neo-Gothic Irish churches, including several papers on St. Colman’s Cathedral in Cobh and a book on St. Finbarr’s Cathedral in Cork. Dr Wilson has also published articles and chapters on Irish Catholic material and visual culture and the work of the Irish sculptor Seamus Murphy and the stained-glass artist Harry Clarke. More recently she has written about picture postcard culture in early twentieth-century Ireland.

Donal Collins studied engineering at Cork Regional College (now CIT) and has worked as an engineer since his graduation. A native of Cobh, he has been involved in numerous engineering projects in the Cork Harbour area, including IFI Marino point, Aghada Power Station, Irish Steel, Pfizer’s WWTP and remedial works on Haulbowline Island. He has also worked on numerous county council construction projects over the past thirty years.
Conference Fee