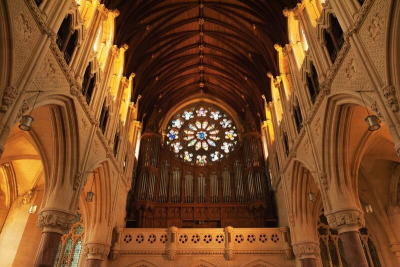 August 2019 marks the Centenary of the Solemn Dedication of St Colman’s Cathedral, Cobh, County Cork, the Cathedral Church of the Diocese of Cloyne.

To mark the occasion, Bishop William Crean will be presiding at a special Diocesan Mass taking place at the Cathedral at 3.00 pm on Sunday August 25th. Archbishop Jude Thaddeus Okolo, Apostolic Nuncio will be in attendance at the Mass, with bishops from the neighbouring dioceses in Munster, as well as clergy and parishioners from the 46 parishes of the Diocese of Cloyne in County Cork.

The Mass will feature music and hymns specially composed for the Centenary by noted Irish composer Bernard Sexton.

St Colman’s Cathedral was built over a 47-year period from the laying of the foundation stone in 1868 to its completion in 1915, at the cost of €235,000. It is a neo-Gothic Pugin Cathedral. It was designed by architects E W Pugin, and G E Ashlin who later partnered with T A Coleman for the completion of the Cathedral. The consecration took place on August 12th 1919. Solemn commemoration ceremonies took place on August 24th 1919 presided over by then Cardinal Logue.

St Colman’s Cathedral boasts the largest carillon of bells in Ireland and Britain – with a total of 49 bells. In preparation for the Centenary celebrations, during the last three years the cathedral Telford Pipe Organ was restored by Fratelli Ruffatti in Padua Italy. Extensive interior cleaning of the stonework and the beautiful stained-glass windows took place over a 6-month period in 2018. New interior lighting has also been installed.

All the work of restoration was made possible by the generosity of the people of the Diocese to whom we are deeply indebted. This is therefore an event for the whole Diocese to celebrate.

Pleae note this is a ticket only event