Fr Sean Corkery was one of five Cloyne priests who accompanied a contingent of young adult pilgrims from the Diocese of Cloyne to World Youth Day in Krakow, Poland (July 2016). The following piece gives an outline of what took place on the pilgrimage: 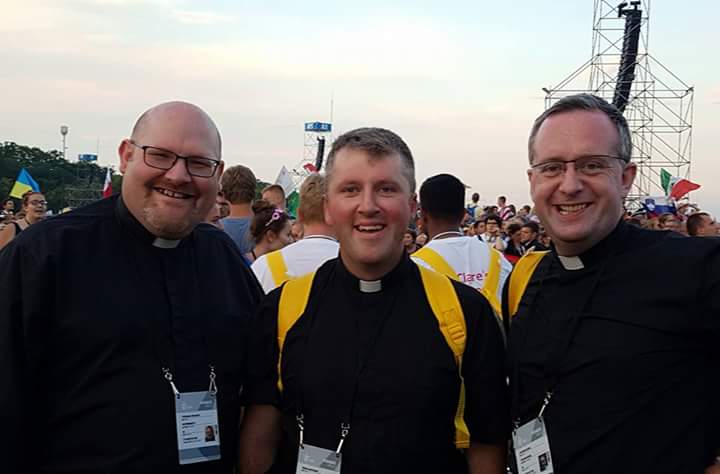 World Youth Day, 2016, Krakow, Poland. Fr Sean Corkery is the priest in the middle of this photo. Fr Tom McDermott is on the left. Fr Pat O’Donoghue is on the right.

World Youth Day 2016 (WYD2016) took place in Krakow, Poland from 26th July to 31st July. Krakow – the city of divine mercy – is the spiritual home of both St John Paul II and St Faustina Kowalska. They were patrons for WYD2016 and key promoters of God’s mercy in the 20th and 21st centuries. Therefore, divine providence was truly at work because WYD2016 in Krakow took place during the Jubilee Year of Mercy with all the graces and indulgences which flow from that.

Over 40 young adult pilgrims representing the diocese of Cloyne and the diocese of Waterford & Lismore made the pilgrimage together and have come back with hearts full of joy and love for the Lord. Each of us received a YOUCAT (Youth Catechism) which helped us to learn more about our faith while on pilgrimage. Our group joined 3 million young adults from every continent on earth who made this pilgrimage of mercy and trust.

We were hosted by a parish in the city and they opened their homes to us in every possible way. We had the use of the parish Church for liturgies and a lot of Irish groups were based in that area which made for some great connections being made between young Irish Catholics from other parts of Ireland. 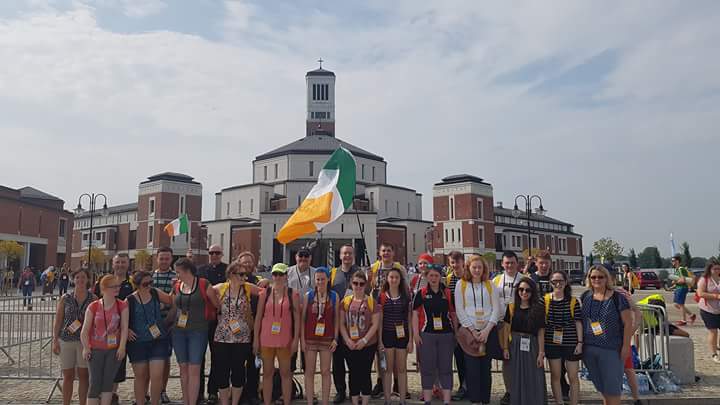 From the beginning, we made a conscious decision to be pilgrims and not tourists. Communal prayer and regular sharing about the Catholic faith with other members of the group became a daily experience. Sharing our positive experiences of faith is not the type of thing we can do very easily in Irish society so it was a very empowering experience to be able to share our love for the Lord so freely. As the week went by, strong ties of friendship built up within the group. What unites us is Christ and it was beautiful to witness the joy of the Gospel on the minds and hearts of so many brave and courageous young people.

On Tuesday evening the opening ceremony and Holy Mass took place in Blonia Park – a famous park in Karkow which has hosted papal events many times. The Archbishop of Karkow led the Ceremony. It was full of inspirational Church music and an atmosphere of reverence and anticipation.

On Wednesday we made the pilgrimage of mercy. This began at the St John Paul II Sanctuary – a shrine dedicated to the life and memory of the Polish Pope and built on the site of the quarry of the Solvay chemical company where Karol Wojtyla worked during the Nazi occupation from 1940-1944. It concluded at the Divine Mercy Sanctuary – the Convent of St Faustina. We prayed the Divine Mercy Chaplet as we went along. On Wednesday evening, many Irish dioceses gathered together in the Parish Church to pray Evening Prayer and sing praise to God. It was led by Bishop Denis Nulty, the Bishop of Kildare and Leighlin. It was an evening of sharing and meeting new people who, like us, love their faith and want to be close to Jesus every day.

On Thursday morning, we had a Catechesis with the Archbishop of Chicago, Blaise Cupich on the theme of mercy. In the afternoon, we made our way to Blonia Park for the Welcoming Ceremony of the Holy Father.

On Friday morning, we had a Catechesis with the Archbishop of Dublin, Diarmuid Martin. He focused a lot on two questions – ‘Who is Jesus Christ?’ and ‘Who am I?’ In the afternoon,

we made our way once more to Blonia Park for the celebration of the Way of the Cross. These were based on the corporeal and spiritual works of Mercy. It was a very meditative and moving experience.

On Saturday we began our day with Holy Mass in the Parish Church. Bishop Phonsie Cullinan led us and touched the hearts of the whole group with his words. He brought together many of the themes of the week and challenged us to be missionaries for Christ in our own land. We then set off on our walking pilgrimage to Campus Misericordiae – the camp site outside Krakow where the Vigil with the Holy Father and the Adoration Concert were held. Along the way, we took some shade under a tree as a group and did a catechesis on the theme of faith. We used our YOUCAT for this. When we arrived at the Campus, the sheer vastness of the site was extraordinary to the point of being overwhelming. It was a festival of faith for everyone who was blessed to have been present for it. We camped outovernight and on Sunday morning, from 7am onwards, preparations took place for the final Mass with the Holy Father. There are so many memorable images from this Mass which we will treasure forever. At the conclusion of the Mass, the Pope announced that World Youth Day 2019 would take place in Panama. This brought great joy to everyone, especially those from the Americas.

On Monday we departed Krakow and made our way to Wroclaw for our flight home on Tuesday. We spent the day visiting Częstochowa – the Marian Shrine of Poland where the Black Madonna Icon is on display. This was a moment to offer some prayers of gratitude for the gift of faith and for our safe passage through the events of WYD2016. We had a catechesis on the bus from our YOUCAT.

As the days of our pilgrimage passed by, the numbers of people swelled to something in the region of 3 million young Catholic adults. We managed to walk over 120 kms around Karkow over the seven-day pilgrimage. As a priest, it was a great blessing to be among young people who are so eager to learn about Jesus Christ and the teachings of his Church. I felt so proud of every one of them. They were a credit to their families, their parishes and their country. It was also a blessing to listen to Pope Francis as he confirmed us in the faith. He urged young people to leave the comforts of what he called “sofa happiness” and, with Jesus’ help, put on “walking shoes” to make a mark on history. “You might say to me: Father, but I have my limits, I am a sinner, what can I do?,” the Pope said. “When the Lord calls us, he doesn’t worry about what we are, what we have been, or what we have done or not done. Quite the opposite. When he calls us, he is thinking about everything we have to give, all the love we are capable of spreading. His bets are on the future, on tomorrow. Jesus is pointing you to the future, and never to the museum. . . . So today, my friends, Jesus is inviting you, calling you, to leave your mark on life, to leave a mark on history, your own and that of many others as well.”

Jesus I trust in You

Vocations Afternoon An afternoon for men considering a vocation to the Priesthood in the Diocese of[...]

I welcome the appointment of Monsignor Michael F. Crotty of the Diocese of Cloyne to the positio[...]

Grow in Love of the Lord Parish Training Day