You are here: Home › News from the Diocese › Press Release on the Ordination of Permanent Deacons in the Diocese of Cloyne
Posted: September 18, 2017

Press Release on the Ordination of Permanent Deacons in the Diocese of Cloyne.

On Sunday, 24th September 2017, Bishop William Crean, Bishop of Cloyne, will ordain six married men as Deacons for service in the diocese. The vocation of deacon in the Church is a specific one. Different to priesthood, it is, however, a participation in the sacrament of Holy Orders. Deacons “…receive the imposition of hands ‘not unto the priesthood, but unto the ministry” (Catechism of the Catholic Church, 1569).” (Catechism of the Catholic Church, 1569). Their ministry is a threefold ministry of service to the Word of God, to the Altar and to Charity, especially the service of the poor. This latter pastoral aspect enriches the deacon’s ministry of the Word and in the Liturgy and vice versa. They have a special relationship of service to the Bishop and to the People of God.

The history of the diaconate (that is, of the ministry of deacons) is traced back to the Acts of the Apostles in the Church’s earliest days, when the Apostles chose seven men to assist in the care of the faithful. Among these seven were Stephen and Philip. The Acts of the Apostles testifies to the ministry of Stephen as an eloquent and ardent preacher of the Gospel and to his martyrdom. Acts also testifies to Philip’s ministry of catechetics and sacramental preparation and to his baptism of the Ethiopian. Among the Churches saints and martyrs are many deacons, including Laurence whose service as deacon in Rome included the administration of the Church’s goods and a deep love for the poor whom he described as “…the treasures of the Church.”

Over the centuries many of the tasks of the deacon were undertaken by priests and by Monastic and Religious communities. The diaconate became, in the Latin Rite of the Catholic Church, a final stage on the road to priesthood, while always maintaining its distinction as a separate order. The Second Vatican Council called for the restoration of the diaconate. This permanent diaconate, which can be conferred on married or single men, constitutes an important enrichment for the Church’s mission. For almost fifty years permanent deacons (that is, deacons not destined to become priests) have served the Church in many countries throughout the world. The Bishops of Ireland began the process of introducing permanent deacons in Ireland in the 1990s. The first deacons were ordained for the Archdiocese of Dublin and the Diocese of Elphin in 2012. The diocese of Cloyne first accepted aspirants for the diaconate in 2013. Six men have now completed the formation process and three more are at present in formation.

While we welcome the ordination of our first permanent deacons in the context of falling numbers of priests, it would not be correct to see the diaconate simply as a replacement for the priesthood. The fullness of the Church’s ministry is seen in the co-operation of Bishops, priests and deacons with the people of God in a co-responsibility which includes a variety of gifts and a variety of roles. Deacons are not to replace priests or to replace the ministry of lay people who serve the community of the Church in an increasing number of ways. Rather, they
are called to assist and encourage both.

Permanent deacons have their first responsibility within their own marriages and family lives. They also continue in their secular employment and are responsible for their own upkeep and the upkeep of their families. Their ministry is, therefore, restricted in time by those commitments but they remain deacons at all times. It is the Church’s intention that the two sacraments of Matrimony and Holy Orders would enrich each other in the life of the deacon. While the diaconate in the Catholic Church is open to men, Pope Francis has appointed a special commission to investigate the scriptural references to women deacons and the theological and historical possibility of admitting women to the diaconate in the future. The work of
the Commission is ongoing.

From Buncrana to Bratislava – serving the diocese of Cloyne:

Garrett Cody (52), originally from Glasheen, Cork, now lives in Garrvoe, in the parish of Ballymacoda, with his wife Bridget and 3 teenage children. Garrett works as a Manager with the HSE in Older Persons’ Services in Cork. The greatest challenge Garrett expects to face is the integration of family and professional life with ministerial responsibilities.

Peter Gurbal (44), originally from Bratislava, Slovakia, now lives in Cobh with his wife Lenka and five children ranging in age from 13 to 1 year old. Peter is a sales assistant in the grocery sector. Peter is interested in all aspects of ministry, especially leading prayer groups among the younger generations.

Damian McCabe (40), originally from the northern coast at Fahan, Buncrana, Co Donegal now lives on the southern coast at Whitegate in the parish of Aghada, with his wife Rachel and 2 daughters aged 9 and 3. Damian works as a Chartered Accountant with PepsiCo Ireland. Damian enjoyed his time of formation, especially growing in his own faith and developing a clearer understanding of the Church.

Edward Mulhare (50), originally from Cahergal Lawn, Ballyhooly Rd., Cork, now lives in Castlemartyr, parish of Imogeela with his wife, Valerie, and 5 children aged from 18 to 9. He works as a Cabinet Maker with ORM Ltd, Castlemartyr. Eddie says: “The deacon will be a witness to the faith in the workplace, the housing estate and among neighbours and friends.”

John Nestor, (47), originally from Douglas, Cork, also lives in Castlemartyr with his wife Catherine and two teenage children. John is a triplet! He is a Social Care worker. John sees the deacon being of service to the marginalised and promoting justice and the social teaching of the Church.

Brian Williams, (43), originally from Clonmel, Co Tipperary, is at present moving to the parish of Macroom, Co. Cork with his wife Sharon and 2 daughters aged 9 and 5. Brian has been the Director of Cloyne Diocesan Youth and Community services for the past ten years. Brian’s hopes for his ministry as a deacon: “I hope that as a deacon I might be able to reach out to and connect with people who are feeling isolated in our communities.” 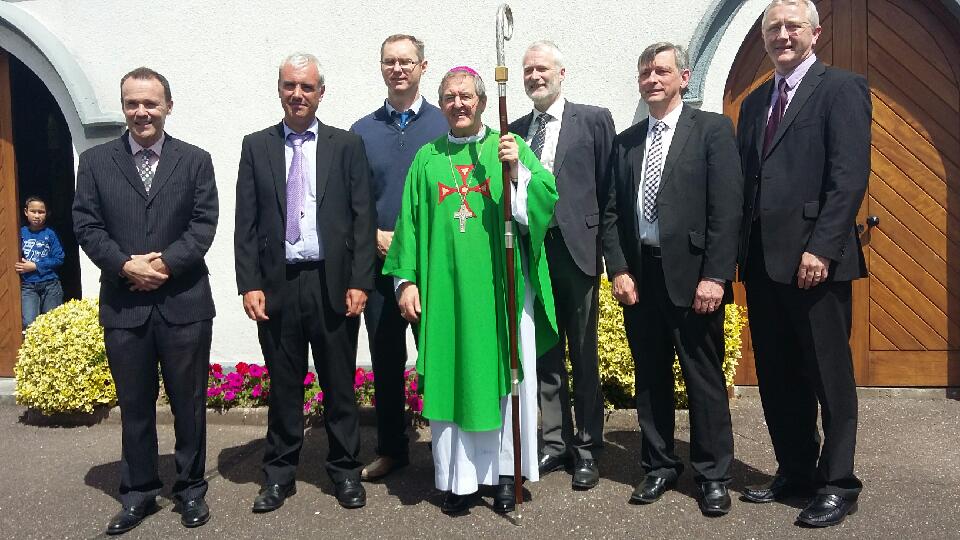 Recently the Women of Faith Conference took place on Radio Maria. It was the second year of this con[...]